As is tradition, Google has released their laundry list of search algorithm changes implemented throughout the month of May. The most notable changes involved updating signals for inorganic links, alternate title generation that eliminates longer tail keywords from a title for a given search, and an improved ability to detect the “freshness” intent of a search query. Source: Search Engine Land

Who says Google doesn’t listen to advertiser feedback? Google received moderate pushback from AdWords professionals over its hastened rollout of an update that caps ad rotations at 30 days. After a month, Google has announced it will increase the limit to 90 days and provide an opt-out feature. Perhaps the most interesting part of this change is how it was influenced by a change.org petition. Source: Search Engine Watch

Yesterday Google announced that the Trusted Stores program they have been testing is now open for all U.S. merchants to apply for. Being approved for this program will give any merchant a big competitive advantage. Those merchants approved as a “Trusted Store” will get a Google Trusted Store Badge. If a user hovers over this badge and the user will see a “report card” for the merchants shipping and service as well as some more precise metrics about what those mean. See Below: 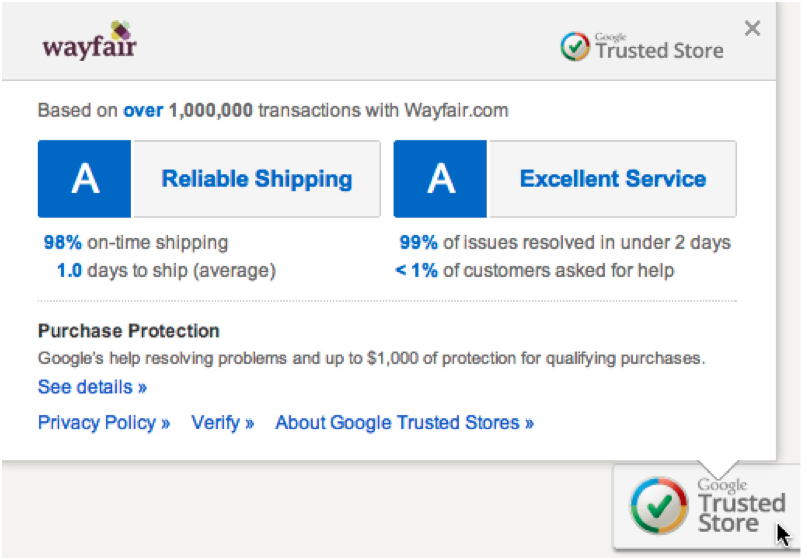 On the PPC side the badge and metrics are something that we will start to see in ads (see below). This is another huge competitive advantage because 1. It gives you an additional line in your ad. 2. It’s no longer just you saying your service is great. Google is now including proof. The example below is for a brand ad, but it is unclear if these will show in non branded keyword ads. If these do show on non brand searches this will give the merchant a big leg up on the competition.

Google’s Website Optimizer Is Going Away, But They’re Adding A Split Tester

Google’s venerable old split-testing workhorse, Google Website Optimizer is being phased out of existence on August 1 of this year. It’s being replaced by a new tool within Analytics called Content Experiments, which essentially functions under a similar interface, but does not offer multivariate testing. It does, however, feature simpler code and Google Analytics integration, and better Events goal support that makes tracking actions easier. Source: Search Engine Journal

With IPv6, The Internet Just Added A Ton Of New Wings To Its Mansion

The Internet Society (yes, this is a real thing) recently approved and implemented the change from IPv4 to IPv6 on Wednesday. The upgrade increased the Internet’s growth capacity and prevents a slowed experience for website visitors, provided they upgrade their transitional gateways accordingly. Google does a great job of explaining the switch, so be sure to read the post below. Source: Google

It was not a good week for LinkedIn. Hackers recently ganked over 6.5 million passwords from the business-based social network, and an iOS security glitch in the LinkedIn app’s calendar-sync feature, discovered by Israeli researchers, can easily expose a user’s private information. As with any security breach on a popular website, change passwords accordingly. Source: Search Engine Watch

Our Mobile Planet Allows You To Compare, Contrast Smartphone Behavior By Country Or Region

Smartphones are exploding in popularity around the globe, and in many countries, serve as the primary source of Internet access for many people. OurMobilePlanet.com is a websites that gives you the ability to see how mobile phone behavior differs by country, and allows you to graph out any trends you may be interested in applying to your marketing strategies. Source: Our Mobile Planet

Pew Internet’s 2012 Twitter Survey found that 15 percent of adults use Twitter with 8 percent of those adults using the site on a daily basis. That 8 percent represents an increase from the 4 percent of users who said Twitter was part of their daily routine just last May.  As expected, Twitter use is much more prevalent among young Internet users with some 26 percent of people ages 18-29 using the site. Source: Search Engine Watch

BrightLocal’s 2012 Local Consumer Survey found that 66 percent of people are willing to recommend a business to a friend if their experience warrants it. Restaurants were the most likely business to be the subject of recommendations followed by doctors and dentists. While word of mouth is still the primary channel for these recommendations, the results suggest Facebook, which came in second, is becoming an important source as well. Source: Search Engine Land

Apple’s somewhat tenuous relationship with Google continues, with Apple set to preview a new piece of map software for its mobile devices.  The software will oust Google Maps from the iPhone. The impetus for developing the new software was as much a product of Steve Jobs disdain for Goggle as it was a calculated business decision. Source: Search Engine Land

As is usual at SMX Advanced, Danny Sullivan had a chat with Matt Cutts about what’s going on in his world lately, particularly in the webspam-fightin’ area of his world. Matt talks about some major changes in how Google’s had to approach the war on Spam, and some admissions Big G has had to make about collateral damage and exploits. Analysis By: Matt McGee, Search Engine Land

Speaking on a SMX Advanced panel, Danny Sullivan delivered one of the best rants about the changed landscape of link building. Just listen and enjoy as he tears apart some of the most popular, bad questions he often receives about Google’s ever-morphing view of link value. Analysis By: Jeremy Bencken, WebSimple

The A To Z Guide To A Complete SEO Audit

The more Google updates its algorithm and ranking signals, the more a full SEO audit becomes a vital part of your job as an Internet marketer. Steve Webb, a self-professed SEO audit junkie, has a start-to-finish guide for completing a comprehensive SEO audit that can help diagnose any potential Panda or Penguin-based problems. Analysis By: Steve Webb, SEOmoz

A Peak Into The Boston Globe’s Paid Content Machine

Many newspapers seem to be jumping on the paid content train much slower than they should have, which tends to favor the papers that have a deeper footprint in the world of journalism. The Boston Globe, who recently implemented a paywall, is part of the latter. Marketing Sherpa took an interesting look into how the newspaper is marketing its paid and free content offerings, and juggling the oft-challenging prospect of growing digital revenue from consumers and advertising alike. Analysis By: David Kirkpatrick, Marketing Sherpa

IPv6 Is A Pretty Good Thing For Internet Marketers, Vendors

The bulk of Internet users will likely not understand the difference between the switch from IPv4 to IPv6 (that’s how you know it worked!), but those of us that essentially use these series of tubes for a living should view the change as a big win. Analysis By: Peter Pachal, Mashable

Rand Fishkin brilliantly lays out the founding principles of content marketing in a simplistic, truthful way. Alliteration aside, it’s well worth a watch. Analysis By: Rand Fishkin, SEOmoz

Removing links in the wake of a Google algorithm update is nothing new. Then again, neither are the unintended consequences of owning up to a spammy link. Eric Ward outlines some black hat tactics based in link removal strategies, and how to effectively request for link removals while inflicting minimal damage to your site and link profile. Analysis By: Eric Ward, Search Engine Land

How To Own Google’s Authorship Markup

Google’s authorship markup attribution strategy has morphed multiple times since Matt Cutts first introduced the tactic at SMX Advanced 2011. Rick DeJarnette has been there from the beginning, and uses his trial and error experiences to provide a how-to guide for ensuring your original content is correctly attributed to its actual author. Analysis By: Rick DeJarnette, Search Engine Land

People who work in advertising and marketing are worlds apart from the “normal” people when it comes to how they use social media and how they view social media marketing. We are also more likely to “mis-behave” at office parties more than the average office worker. Analysis By: Christine Champagne, Fast Co.Create

As if Facebook wasn’t already hurting from its recent stock debacle, financial analyst Eric Jackson of Ironfire Capital recently predicted on CNBC that the social network will be a shell of its former self in the very near future. Jackson cited past examples of Internet giants dwindling away, like Yahoo, and said that he believed Facebook would struggle transitioning to the mobile platform. Analysis By: David Angotti, Search Engine Journal

Platforms like HootSuite and Tweet Deck get a lot of coverage for their usability and time-saving features. However, Jeff Haden at Inc. has a list of eight generally unknown Twitter tools that deserve a little more credit than they get for making the social network easy to use. Analysis By: Jeff Haden, Inc.

Re-Imagining Digital Advertising With The Help Of A Few Legends

Can the creators of four of America’s most iconic advertisements help revolutionize digital advertising the way they revolutionized television ads? That’s the question at the heart of Google’s Project Re:Brief. Analysis By: Project Re-Brief

It’s well worth it if you want to re-align your chi and/or chakra. Analysis By: Calm.com

Google Rolled Out Panda 23 For The Holidays, The News Meta Tag Remains Relatively Unused, The Feds Can Read Your Emails, & More