Eric Schmidt’s testimony in front of a Congressional subcommittee, concerning Google’s business practices, unearthed some interesting tidbits about how Google tests its algorithm tweaks. Among them, humanized focus groups, click evaluations, and internal analysis contributed to around 500 algorithm changes in 2010.

I Taught I Taw Some AdWords Tests

A few people have spotted a trifecta of AdWords tests over the past week. Here they are in a quick list rundown:

Facebook announced its next re-design at F8, after which the panicked Facebook villagers grouped together in a frenzy of burning torches, pitchforks, and scythes as they march down the cobblestone road leading to Mark Zuckerberg’s castle.

Yahoo! Makes Over Its Search Design And Features

Yahoo! has opted for a more stripped down version of its search page. Instead of detailing the changes here, we’ll just refer you to the article and the screen shot below. 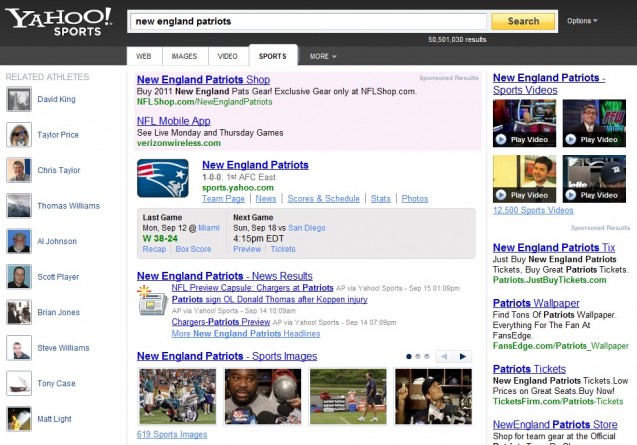 An optimized website/landing page is crucial to increasing conversions in organic search results using a desktop computer, so why would mobile sites be any different? Google recently announced that a poorly designed mobile site will affect AdWords mobile ad performance. This is hardly surprising, as the move was based on user studies that indicate they are less likely to return to a site if it doesn’t work well on their smartphone.

The +1 Button Is Now In The Display Network, Mobile Ads

Nearly everything Google touches has a +1 button attached to it nowadays. The Google Display Network is the latest feature to incorporate the button into its ads. The +1 click data will also be relevant to the AdWords auction in display ads only (right now, at least), which could be a powerful tool if the button yields many click-throughs.

Google is also adding the +1 button to mobile ads, although the search engine left some details ambiguous at this time (how to incorporate the ads into mobile apps, how to opt out, etc.). As with any social network widget, Google is hoping these integrations will increase user engagement.

With “Action Buttons,” Bing is aiming to make trip planning easier than ever. The buttons are directed to a specific “book now” area of a site and are located to the right of the site’s SERP rank. This is somewhat in a response to Google Flights, which was launched recently with limited availability.

$11 million per day, $462,962 per hour. Those are the actual amounts of money the Bing search engine is losing regularly, according to a recent CNN Money report. The only way to reverse that absurd number, according to experts, is to take some of Google’s market share. Considering they estimate Bing would have to own 25-30% of the search market to become profitable (they’re currently at 14.7%), that is no doubt a tough task.

According to an Online Consumer Report study from RichRelevance, organic search engine results are still the top source of traffic to e-commerce sites (18% of all traffic). Some of the other pieces of information, which could provide valuable insight into current online consumer trends leading into the holiday season, include:

Google Runs Down Their Biggest Updates To Google +

Since launching Google + approximately three months ago, Google has altered or added 91 features, including +Hangouts (live video chatting), and +Search (integrated Google search that returns suggested profiles as well as results from around the web. The search feature may be the best thing they’ve added in that time span.

Predictably, Google Maps has integrated Google +Snippets to increase easier sharing of your preferred destination or search. This works only if you’re logged into your Google + account, and is just another example of Google cohesively tying all of its applications and programs together.

Anyone Can Join Google + Now

If you’re a traditional hipster, Google + just got lame. Now everyone that wants to use the fledgling social network can create an account. Previously it was only available through invites from current users, but Google has decided (after 99 updates and alterations) to give the people what they may or may not want.

If you own a Sprint Nexus S 4G phone, you are officially the first consumer capable of accessing Google Wallet. The long expected release of the mobile payment program from Google is currently only accessible by these users, but Google is working with other major credit card companies to expand Wallet’s availability.

STUDY: One Third Of Adults Opt For Text Messages Over Voice Calls

The Pew Research Center’s Internet and American Life Project has released a study focusing on mobile phone demographics and trends. Among the findings:

Mashable also features a cool infographic breakdown involving some of the study’s findings.

That Won’t Split Into Two Companies

The History Of Page One In Google SERPs

Since “search engine optimization” became a recognized term in 1997, ranking on page one of any search engine’s results page has become the ever-present quest for the SEO Holy Grail. Search Engine Journal has a great infographic detailing the rise of every existing factor involved in ranking on the first page.

A YOUmoz post details how giving things away can be extremely effective for link building, and offers 99 giveaway options to consider. The ideas are there; now the onus is on you to execute!

Plan Your PPC Strategies For The Holidays

The holidays are approaching faster than anyone wants them to, and it’s never too early to plan your ad campaigns for those inevitable booms in traffic. Search Engine Watch features a good article that details the most common trends worth including in your plans.

The Bible Of Relevant PPC Metrics, According To 17 Experts

Anytime you can get 17 industry experts in any field to concoct a list of the most crucial metrics for success, it becomes a necessary read. In the case of PPC, 17 experts have offered their take on three of the most integral measurements available in every AdWords account.

PPC Hero comes to the rescue with a well organized list of common practices (weekly, bi-weekly, monthly, etc.) to ensure success with your client’s PPC account. It’s definitely a good read for any PPC marketer, and a must read for those still learning the ropes.

INFOGRAPHIC: Do Online Reviews Have Your Business By The Throat?

There are only so many ways to say “Are online reviews killing your business?”, but this infographic breaks it down into the most common pro-active remedies to this potential online poison pill.

SEO And Link Bait: It Works, But It’s Hard

Search Engine Land features an article that details the entire link bait process and why it can be extremely valuable for building notoriety and driving traffic to your site.

Facebook’s design changes will have an effect on how marketers use and view the social network. Much like Google Panda or an algorithm change, these Facebook updates involve re-tooling the importance of some of its biggest features. Most notably, the “Like” button will not be as important as before.

The blindsiding move to split Netflix’s mail and streaming DVD services has produced tons of analysis attempting to explain, defend, or complain about CEO Reed Hastings’ decision. Some say it’s because of licensing, while some say it’s a great pro-active idea that will be applauded over time.

Analysis By: Mark Suster, Both Sides Of The Table