Sites that require age verification, such as alcohol websites, have traditionally acted as a roadblock for Googlebot and SEOs have struggled to develop an effective workaround. In the past interstitials worked well, but with the recent Google update the demotes interstitial page content. Google’s John Mueller announced that they prefer pop up style DIVs over interstitials and at all costs avoid a redirect to the interstitial. Source: Search Engine Roundtable

A new tool introduced for publishers called the Ad Experience Report has recently been released by Google to measure how well a site’s ads comply with the Better Ads Standards. Put simply, the tool helps publishers identify how annoying their site’s ads are. The report will display screenshots that identify the annoying ads to help publishers understand what needs to be fixed. In addition to this, later in the year, Google will offer “Funding Choices” to publishers which will allow site visitors to pay to remove all ads on the site. Source: Search Engine Journal

Continuing the trend of recent search enhancements, Bing added a new advanced image search feature named Bing Visual Search. Unlike traditional reverse image search, Bing Visual Search allows users to pinpoint part of an image they would like Bing to hunt down. This feature works on Bing.com and the Bing app through mobile and desktop while also searching for matching product pages. Source: Search Engine Journal

Google has recently launched structured snippets globally with the update to the interface to include a large number of languages for this extension. One note is that the AdWords editor still shows the old list of languages and has not yet been updated with the new list. While many AdWords managers have been using this feature since 2015, there will likely be some excitement for certain advertisers who wished to try them out in other languages. Source: The SEM Post

Andrew Lolk wants to help you get the most of your seasonal Shopping efforts with several helpful tips to push that ROI when the time comes. First of all, don’t forget to reactivate your previous high season keywords. On the ad side, you can include countdowns to create a sense of immediacy for users to purchase sooner rather than later. A more interesting tip Lolk gives is that he likes to split his top money-making campaigns into their own mobile campaigns. Lolk then explains his reasoning for doing this with a reference to the great Matt Umbro saying how PPC Pros are baffled at how little attention some AdWords account managers give to mobile. Source: Andrew Lolk, Search Engine Journal

The Mobile SEO Stack: A Graphic You Didn’t Know You Needed

As the crawl towards Mobile First continues, finding effective mobile SEO tools can be frustrating in a sea of sites, plug-ins and programs boasting their superiority. Moz blogger, Aleyda Solis, began testing these tools and created a Mobile SEO Stack that pairs different tools to the mobile-focused SEO question it can best answer. While there is no single tool to answer every question, tools like Sistrix and SEMrush tend to provide the most relevant data for a range of SEO concerns. Source: Aleyda Solis, Moz Blog 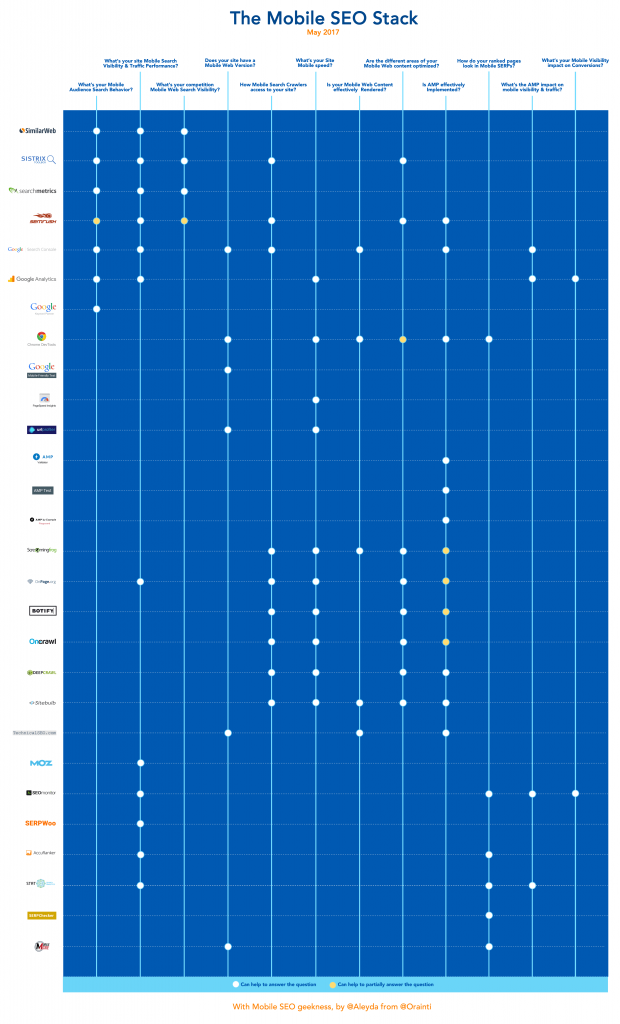 Google Buys Nest Labs, The Days Of Anonymous Trolling On Yelp May Be Over, & More