This happened two weeks after the House Subcommittee on Antitrust released a report identifying Google as a system of “interlocking monopolies.”

Among other things, the DOJ says that Google “uses revenue sharing, direct payments and restrictive contracts to block rivals from gaining wide distribution and competing effectively.”

Additionally, they say that Google uses its power to coerce mobile phone makers to pre-install Google apps if they want access to the Google Play store.

The DOJ argues that a monopoly on search technology can have a negative effect by stifling future innovation in the industry:

“If we let Google continue its anti-competitive ways, we will lose the next wave of innovators and Americans may never get to benefit from the ‘next Google.’  The time has come to restore competition to this vital industry.”

Google is testing a new Google My Business feature that will show you recent calls made to you from Google Maps and Google Search from your Google local listing. It’s called Preview Call History and it will be exclusively available through the Google My Business app. It will not be available on the browser version of GMB.

When the feature is officially launched, users can access the feature by clicking the “Call” button on their GMB profile. The feature will log both missed and answered calls and keep them for 45 days in the “Calls” tab. Call history tracks phone calls but not texts. Additionally, it disguises your actual business number.

If users do not want to use the Preview Call History feature they have the ability to turn it off from their GMB dashboard.

Throughout the history of the Google Ads platform, Google has created new ways and new areas for advertisers to be on. They usually start as tests and some end up moving on to become full-fledged advertising opportunities. Recently Google has started to test a new kind of advertising by bringing ads into the Maps search results. As you can see in the image below the user is searching for Red Lobster and is seeing an ad for the nearest Red Lobster in the second search result. 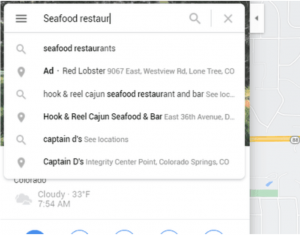 This new test could create a completely new landscape for locally based advertising. This could also potentially pull hints from Shopping and allow users to receive an ad for a location associated with what they searched for. For example, if someone searches “basketball” on maps, there could be a bidding war for that ad spot from local basketball shops.

At the moment Google has said, “We’re always testing new ways to improve our experience for our advertisers and users, but don’t have anything specific to announce right now.” Keep an eye out for ads in Google Maps in the future!

With constantly shifting marketplace dynamics, Google revamped the insights page to help assist in data-backed decisions. This page not only shows forecasts & insights that your team could benefit from but also allows you to implement those changes without leaving the page. 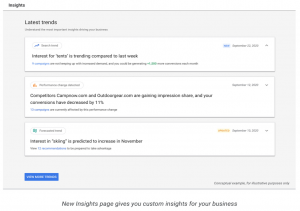 In the example above, the Insights Page points out:

While we do not know all the insights or exactly how large of an effect the insights can have on success, key an eye out for the beta in a few months.

Every week, the digital marketing analysts at Rocket Clicks round up the most interesting, exhilarating and dare we say controversial news to share with the team. We’ve collected the most notable digital marketing news stories from the month of October to share with you here! Contributors to this post include PPC Analyst Pete Von Rueden, PPC Analyst Mitch Milaitis and SEO Analyst Antonio Ninham.