Remember when Nokia was on top of the cell phone world and Snake was the most addicting game on a black and white screen? Well Nokia has joined together with Microsoft in an attempt by both companies to become more relevant in the new age of smart phones and mobile devices.

In Nokia’s Conversations blog, Nokia CEO Stephen Elop and Microsoft CEO Steve Ballmer laid out some preliminary initiatives brought on by the partnership, including Nokia adopting the Windows Phone as its primary focus for mobile strategy and Bing as its official search service, and a merging of multiple Nokia/Microsoft platform and application services.

Neither company has made much of a dent in the mobile phone world, so it will certainly be worth monitoring whether these two company’s combined strengths are enough to become a player again next to Blackberry, iPhone, and Android smartphones.

President Obama traveled to Marquette, Michigan on Thursday and laid the foundation for expanding high speed wireless Internet access to 98% of Americans while still reducing the deficit over the next 10 years by $9.6 billion. Here’s a quick run down of the plan:

– Investing $5 billion into a fund that ensures fast wireless technology is available to rural areas
$10.7 billion for developing a wireless network to support public safety agencies
– Making 500 Megahertz of wireless airwaves available over the next decade to meet the growing demand for broadband services
– The FCC wants to re-purpose 120 Megahertz of airwaves through incentive auctions, where television broadcasters would voluntarily give up airwaves for a portion of the proceeds
– Those auctions, and more efficient use of government airwaves, should raise $27.8 billion over the next 10 years

The past week has been so rich in preventable drama for GroupOn that it makes MTV reality shows look like success stories. Here’s a recap:

– GroupOn runs ads on Super Bowl that appear to make light of certain social causes
– There is a public “outcry” regarding the ads
– Battle lines are drawn but most people think the ads are a mistake at best and an incredibly stupid move at worst
– GroupOn gets more free press than anyone if you don’t mind your brand being associated with the words insensitive, arrogant, pompous, etc. (along with an occasional ‘brilliant’ to be fair)
– Top ad agency Crispin Porter takes shots as well for creating the ads
– GroupOn CEO Andrew Mason posts his view on the situation on the GroupOn blog and gets more heat for the post’s attitude and lack of a real apology for the ads
– More free press from traditional media and bloggers that at least mention the GroupOn brand. Once again it depends on what you read if the associated words describing the company are naughty or nice
– CEO Mason tries to put a final nail on the situation with a post that again falls short of an apology and has the air of “You people just don’t get it do you?” although a bit less so than the first post

On the bright side, Conan O’Brien got some mileage out of it.

Two powerful, strong hero-types (Facebook and Google) are in the preliminary stages of courtship with a lovely damsel (Twitter) in regards to potentially taking over the popular social media site for as much as $10 billion. Twitter has 175 million users, and is valued at around $3.7 billion while pulling in $200 million in yearly revenue.

There are thousands of love triangle movies that center around a woman choosing between two  suitors (Something’s Gotta Give, There’s Something About Mary, The Notebook, Twilight, Alien vs. Predator), so I’ll let you come up with the best reference to use here. Be prepared for a less popular, just as profitable sequel if Twitter turns both companies down.

Social networks are slowly becoming major players in the online advertising market, accounting for 10.8% of projected 2011 online ad spending.That number will most likely increase to 12.1% in 2012, as more and more marketing firms and departments jump on the social network advertising bandwagon.

Google has created an advanced log-in feature called “2-step verification” that increases the security of your Google Account when spammers try to break in. To verify your account, you need to provide your password as well as a code sent to your phone. The “2-step verification” will show up in the next few days in your Account Settings: 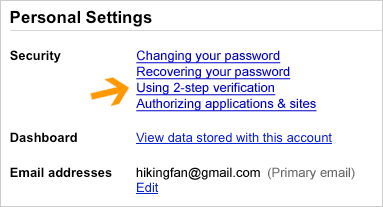 A set-up wizard will help guide you through the potential 15 minute process, and the code verification screen will look like this:

Gawker Media sites recently underwent a major redesign, to the disdain of many regular (and casual) visitors to sites like Deadspin, Lifehacker, and Gizmodo. But the biggest problem involved Gawker’s reliance on JavaScript and the effect it had on search engine crawls.

Since the redesign went into effect on February 1 and up until Friday, Gawker sites were not showing up on Google News. The problem has been fixed, but Gawker lost a TON of traffic they can’t get back.

Was The iPhone’s Verizon Debut As Big As Expected?

With all of the build-up leading to Apple’s iPhone being available on Verizon’s network, one would assume that city streets would’ve had to be blocked off to handle the enormous lines of people anxious to buy the smartphone. Verizon and Apple stores might have also assembled a team worthy of “Black Friday” proportions ready to handle the deluge as well.

So, when eight people showed up at a New York City Apple Store and around 12 at a nearby Verizon store it would appear that the phone’s arrival on a new network didn’t spark as much interest as was projected. Or did it? Online sales to current Verizon customers, reports of anywhere from 250,000 to 1 million devices sold, may mean the opposite. And what about the projected 2.5 million AT&T defectors that claimed they’d be switching over?

There is a lot to keep an eye on with the iPhone moving over. Such as, will being available on multiple networks help the device regain its top spot above Android devices? And will Verizon’s network get slower due to the data hogging iPhone? Stay Tuned.

Arianna Huffington Gets A Raise, Acquires A Lot More Work

In a 315 million dollar deal, AOL has added the Huffington Post to their list of news sites that includes TechCrunch and Engadget. AOL is hoping that adding Huffington Post’s 387 million global visitors per month and by also creating the position of president editor-in-chief of all AOL’s content for Arianna Huffington is just the spark that the ever fading cooperation needs.

While Google and Blekko appear to be moving toward black balling content farms, this move by AOL seems a bit risky. It could also possibly mean that AOL doesn’t A) know what a content farm is B) are too busy reading HuffPo to keep up on the latest news regarding Search Engines, or C) they had 315 million dollars to burn. Let’s see if this latest move makes AOL relevant again or if it was just another bad decision.

New HP Tablet Brings Palm’s WebOS Back Into The Arena

While Palm rapidly lost steam on the smartphone market, their acquisition by HP last year brought a bit of hope to their faithful users. To stoke the fires of the few Palm faithful, HP recently announced three devices, including a tablet, that all run on Palm’s WebOS and that should all be immediate competitors in the smarthphone and tablet markets.

The most interesting of the three is the TouchPad, a tablet that boasts a “screaming fast” dual-core 1.2 ghz processor, and unlike its competition, the ability to simultaneously run applications and play Adobe Flash movies. On paper and from the screenshots, the TouchPad looks and sounds very impressive, but it seems we’ll have to wait until summer to see if there’s room for a third OS to challenge Apple’s iOS and the Android OS.

From Ernest Hemingways Of The Web

Have You Ever Wanted To Ask Marc Andreessen A Question? You Missed Your Opportunity

Creator of Netscape and board of director’s member for multiple corporations, including Facebook, eBay, and HP, woke up mighty early February 4th to dish out vast amounts of wisdom to users of question and answer site, Quora. Click the link to find out if he thinks that Facebook should’ve sold to Yahoo or if he thinks that the rich aren’t taxed enough.

Eric Ward Offers The Nuts And Bolts About .Edu Links

Are you under the impression that every link from an .edu carries the same relevance by search engines? If so, take a second and enter the school of link building master Eric Ward to find out if you’re right.

Most site owners know that split tests can be very telling about what converts and what doesn’t. ABtests.com now has a Facebook page set up that shows you two versions of a landing page, order form, etc. and allows you to vote on which one you feel will lead to more conversions. Check it out and use their advice to improve your site.

Are you uninspired by the way your emails to clients look? Check out this book by lawyer and typographical expert, Matthew Butterick that aims to help lawyers, business men and everyone else clean up their unnecessarily ugly communication.

Are you an avid Twitter user? Do you endorse products endlessly and spout off in 140 characters your every move? If so, you may be doing something right. Check out this article that looks at the social media hierarchy and how you can tweet your way to the top of it.